Visit our Cathedral YouTube Channel to watch our most recent livestreams from inside the Cathedral of St. Peter 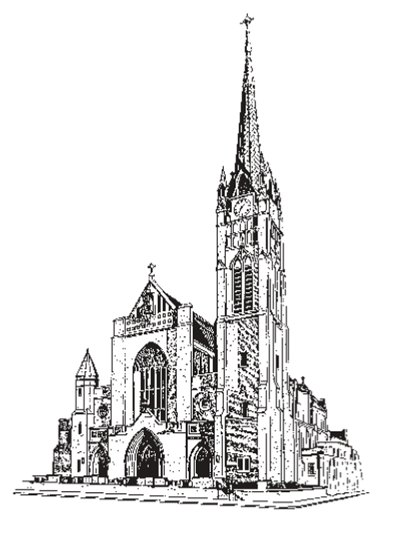 FROM THE DESK OF BISHOP McGOVERN

May the peace of the Risen Christ be with you!

The cathedral church is an important part of any diocese, serving as the official seat of the diocesan bishop. Here in the Diocese of Belleville, we are blessed with the Cathedral of St. Peter which serves as the spiritual home for many people. In the past two years, I have been pleased to meet many parishioners of St. Peter. Some families have been worshipping here for generations, others have recently joined the parish. I am grateful that our cathedral also is a welcoming place where we celebrate important events for our diocese. Thank you to all of you who support the Cathedral.

Father Godfrey has a doctorate in liturgy from the Catholic University of America and has served in a variety of teaching and pastoral ministries over the years. Father Godfrey will begin as Rector here on August 1. In the meantime, Msgr. Myler will continue serving at St. Peter until the end of July.

More information about Father Godfrey will be shared in the coming weeks. For now, please join me in thanking Msgr. Myler for his generous service and in welcoming Father Godfrey home to the Diocese of Belleville.

May the Risen Christ fill you with hope and peace in this Easter Season.

Sincerely yours in Christ,

FOR HIGH SCHOOL YOUTH ONLY:
We are looking at attending the Steubenville Conference at Missouri State with Waterloo in July. Contact Mrs. Furlow if you are interested in attending either of these events.

We are still looking for some more adults to help with the meetings.  If you are interested, let us know.

Guest Musicians were The No-Name Chorale.

Bishop Michael McGovern was the celebrant.

You might enjoy this 30-minute video, “Saint Joseph in Art.”

I put together ancient images of St. Joseph, along with modern images — from Europe, Asia, Africa, Latin America and the United States.

HISTORY OF CATHOLIC EDUCATION AT THE CATHEDRAL

I’d like to bring you “history” of Catholic education here at the Cathedral. (The info is taken from a 1981 “History” by an unknown author.)

In colonial America, the idea of going to school was started by religious groups, not by the government.

Catholics in Spanish, French and English colonies wanted to educate their young people, as well as immigrants and Native Americans.

The first Parish School was St. Mary’s in Philadelphia (1767). At that time, there were no public schools in the country, but early state constitutions
encouraged denominational schools. In 1841 the Catholic School System in New York was developed.

In these early schools, subjects were reading, arithmetic, geography and history. Religion was taught as a special topic outside of regular school hours. School was in attendance for about six or seven hours a day, six days a week, ten months a year. Sometimes hours were shortened a bit because of the weather and the seasonal requirements of farming.

Between 1830 and 1890, the Belleville area had a large increase in schools because of the attraction of German immigrants to the fertile farming land.

The history of the school at St. Peter’s in Belleville goes back to 1845 — more than 175 years ago. The first Catholic school in the area was opened in the basement of St. Peter’s Church by the pastor, Fr. Casper H. Ostlangenberg. Fr. Ostlangenberg and Mr. C. Meyer were the first teachers.

Shortly thereafter, Vincent Stainer took charge of the school. His wife taught all kinds of needlework to the girls. Later on there were many other teachers: Jacob Mueller, B. Franz (who played the viola and taught music), J.G. Hellmich and Thomas Decker, to name a few.

Mr. Decker had been born in Germany and was educated in a school on the Rhine. After leaving St. Peter’s he taught German in New Athens and died of yellow fever in Memphis in the early 1870’s.

In 1848, a simple two-room building was erected on the corner of Third Street and Harrison Street for about $400. More lay teachers were employed to teach the upper grades in the new building; the primary grades remained in the church basement.

In May of 1857, Father Baltes started collecting funds for an academy for girls of high school age, Two years later, the 107-foot long, 40-foot wide and 30-foot high large brick building was completed.

THE SCHOOL SISTERS OF NOTRE DAME

In 1859, the School Sisters of Notre Dame came to Belleville. Bishop Junker of Alton and Sr. Mary Caroline Freis of Milwaukee agreed for 9 Sisters to open an institute for young ladies, to teach: German, English, French, piano, guitar, vocal music, drawing, painting, all kinds of embroidery and needlework. This school, called the Immaculate Conception Academy, opened on October 5, 1859.

At the same time, the Sisters took charge of the parish grade school. At the start of the 1859 school year, there were 78 students. Mr. J. Webster taught the boys from Grade 5 and up, along with the Sisters who taught the girls and boys up to the fourth grade.

Four years after it opened, the Academy had to be enlarged; at the same time, a new St. Peter’s Church was built on the corner of Harrison and S. Third Street (where the present Cathedral stands today). The grade school was moved to the “Huber lot” which had been donated to the parish in 1849.

Late in the year 1874, the Catholic Society of St. Peter’s built a brick building on the corner of Harrison and South 2nd. The building cost was $7,000 and was to be used as a school for young men in which all higher branches of education were to be taught.

The classes in the Church basement were moved — and a kindergarten was opened in 1877 with 60 children attending.

120 children attended the schools at that time.

During the night of Saturday, January 5, 1884 — as the students and Sisters were preparing for Epiphany Sunday — a fire destroyed the original Immaculate Conception Academy building on the Cathedral parish grounds. This was one of the worst calamities that ever happened in Belleville: 4 School Sisters of Notre Dame and 16 of the girl student/boarders lost their lives.

But the priests, sisters and lay people began work in April to rebuild the Academy for girls.

Because of the fire, some of the grade school classes which had been held in the Academy were moved to the St. Agnes Orphanage nearby.

Other classes were moved into the building called “St. Peter’s University” — for students who had completed grade school and had received their First Communion. (First Communion at that time was received about eighth grade.)

And then, on April 16, 1888, St. Peter’s became a Cathedral — the mother church of the new Diocese of Belleville — and Father John Janssen was consecrated as its first Bishop.

On November 27, 1891, the Cathedral Grade School was closed along with all other Belleville schools because of a diphtheria epidemic, which killed six children.

In February of 1893 a book of drawings and a book of needlework done by students of Cathedral were sent to the “Chicago World’s Fair” to represent the Diocese of Belleville. A certificate of merit and a Medal were awarded by the World’s Fair Bureau of Education.

In January of 1894, 35 music students gave a well-received public performance.

Ground was broken for a large new $15,000 school hall in March of 1898. Just north of the Bishop’s House, this building served as a Cathedral Grade and High School for many years.

In 1909, the School Sisters of Notre Dame celebrated the 50th anniversary of their coming to Belleville and teaching at St. Peter’s. The 1910 school year started with more than 500 students. (It should be noted that at this time, teachers were paid $25 per month.)

Then came a series of closings in 1914 because of health crises:

— In February 1914 the Cathedral schools were ordered closed because of thirty-one cases of “scarlet fever” contracted by school children. (The Board of Health gave strict orders that houses were to remain in quarantine for five weeks.)

— All Belleville schools were closed in March because of the epidemic.

— In October, 1914 school closed again, this time because of an epidemic of Spanish Influenza. At the end of the month, school reopened but attendance was poor. Sisters Raymond, Ansberta and Margrita became too sick to teach.

In time, the flu threat disappeared when most of the infected had either developed immunities or died.

By the following year, almost 500 students were being taught at the Cathedral. That year, the students presented the operetta “Red Riding Hood” — and continued the tradition by presenting “Cinderella” and then “Snow White”.

The teaching staff at Cathedral in 1926 included Sr. Ignatius (principal), Sr. Pacifica (kindergarten), Srs. Alphonsella and Cyrilla (for the older girls) and seven other SSND’s — along with the Brothers of Mary (for the older boys). In addition to the usual classes, the curriculum included Nature Study and Illinois History. On Friday afternoons, the girls were taught needlework.

Patrol boys were introduced during the 1938-39 school year; the next year girls were allowed to join the patrol forces. Records show that in 1939, school uniforms were introduced for girls and a dress code for boys.

In Jan 1940, the first interscholastic sport — basketball — was introduced. In Feb, Cathedral hosted a 17-team tournament, finishing 2nd behind Murphysboro.

The school library opened its door for the first time in 1942.

In July 1950 the School Sisters moved out of the old school building into the house on the corner of 3rd and Harrison (now the Chancery). During 1951, Msgr. Harbaugh began plans for constructing a new school building; after his sudden death, Fr. Holtgrave took over and continued the project.

Also in 1951, the Cathedral Grade School Band was begun under the leadership of Mr. George Turek.

The number of teaching Sisters decreased, and Cathedral classrooms had many lay teachers. In 1973, mini-courses were introduced: typing, bowling, leathercraft, stamp collecting, guitar and many others.

During the summer of 1980, Bishop Cosgrove announced that the old Cathedral High School — which had served as Cathedral’s gymnasium – was to become the diocese’s Pastoral Center. In 1981, Msgr. McCormick purchased the old pants factory on the
corner of 1st and Harrison Streets.

In 1987, the new gym — a parish facility called the McCormick Center — was dedicated.

Over the years, the name has changed: “Immaculate Conception” … “St. Peter’s School” … “Cathedral Grade School” … and now “Notre Dame Academy.”  The buildings have changed: from a few rooms in a basement … to old buildings now torn-down … to our present site.

What remains the same is the presence of Jesus Christ, the first and best teacher … and the cooperation of faculty, staff, parents, students and parishioners. 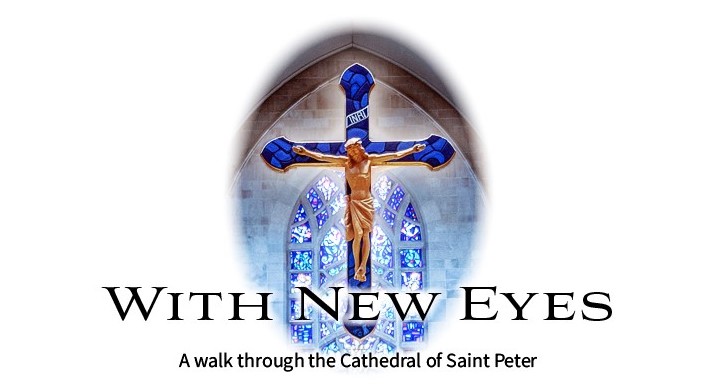 We invite you to “take a walk” through our Cathedral of St. Peter — and to see “with new eyes!”  Links to the 10 videos are below and, as a bonus, we offer a 3D walkthrough of the Cathedral and another walkthrough at Christmastime.

Part One: The Cathedra — The Chair
Part Two: The Altar
Part Three: The Ambo for the Word of God
Part Four: The Tabernacle and the Blessed Sacrament Chapel
Part Five: The Mary Chapel
Part Six: The North Nave
Part Seven: The South Nave and Museum
Part Eight: The Crypt
Part Nine: Baptistry and Confessional
Part Ten: Saints of the Cathedral
Go to Top